This is the first poem I have ever memorized that wasn't a song.  Surprisingly it was easier than expected. Perhaps it was because I expected to not get it right for awhile, so that gave me permission to fail?  I also identified sections and memorable lines to frame the outline which helped pull me through.

It was after I memorized it and met another grace poem that I realized it was foretelling WotY 2015.  Here it is ...

Lovers of God, sometimes a door opens
and a human being because a way
for grace to come through.

I see various herbs in the kitchen garden,
each in their own beds:  garlic, capers, saffron,
and basil - each watered differently to help it mature.

We keep the delicate ones separate from the turnips,
but there's room for all in this unseen world,
so vast the Arabian desert gets lost in it,
like a single hair in the ocean.

Imagine that you are Sheba, trying to decide whether
or not to go to Solomon.  You're haggling over
how much to pay for shoeing a donkey,

when you could be seated with one
who is always in union with God, who carries
a beautiful garden inside himself.

You could be moving in a circuit without wing,
nourished without eating, sovereign without a throne.
No longer subject to fortune, you could be luck itself,

if you would rise from sleep,
leave the market arguing, and learn
that your own essence is your wealth. 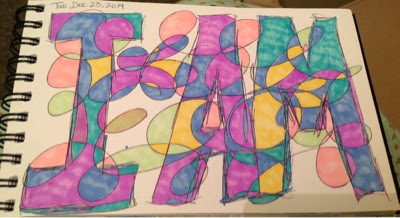