I seem to be having a flurry of *those* moments. You know, those moments when everything magically aligns more perfectly that you could have imagined or planned.

Tonight's I was part of a prayer vigil for the AME 9. The organizers asked the local AME church to preach.  They responded with "Yes and can we bring a choir?"  We said yes!  So there was awesome gospel sung, honest prayers, an inspiring message ... And me with two paperless chants.

The... first was after the message with its reminder that "The struggle isn't over." As one who doesn't like to rush things, I announced there would be a moment of silence before the chant because well, how does one compete with a fiery message? Then I taught the two lines of the chant and let it take over. Thank G-d because I almost missed the cue for the second voice. That chant knew how long to run, knew more than I how much the people needed to sing it, to let the psalmist's words become their words, a promise deepening into a vow and vision of trust. 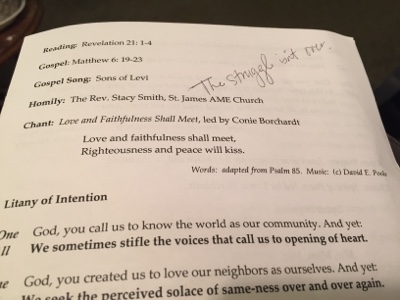 The second chant was after some more prayers. "Spirit of Peace" is from the Dances of Universal Peace canon and is a simple walking meditation with arm movements. Since the list of typical liturgical movement is quite small (sit, stand, kneel maybe, I invited those who felt compelled to join me in the movements if they wished. Sing, hands moving outward like a bird in flight, joining hands, turning, bowing, we walked around. The round started. Quite a few folks joined in. But what really floated my boat was the ending. I started in the middle, walked the perimeter, and then went back into the center again. The attendees were mostly white Episcopalians. There were a few attendees from the AME church. At the end one of the AME women was in the center with me. We processed down the center like equals, turned and bowed to each other as folks sang "Mir, Miru, Mir" (Russian play on words for "peace on earth). We held that wish for each other a long moment. And then she gave me a big hug.

This is a moment I have wished for and didn't know how to authentically make it happen. I'm so glad that I just to put it out there and trust that all the stars will align.
Putting this experience to words only describes a tiny part of what happened.  I can't sing and dance these things by myself to the same effect. The love and longing from all the hearts present added so much. Experiences like this is strong evidence of what we do together is more powerful than what we do alone.
After the service there were many hugs and greetings that I'm grateful for and connections and dreams shared and enthusiastically embraced and supported that I want to share. But for now I will dwell in the beautiful moment of shared coming together in the struggle of dismantling racism.
Posted by Conie at 11:52 PM