What do you do when your snow labyrinth attempts are thwarted by enthusiastic dogs, aloof or single-minded strangers who walk through your design (and not on the path you've created)?  Is the only answer to give up and not make one?
Nah. You gotta work with it!
This winter the walkers in my neighborhood have cut across the church yard as the aloof mailman and the hungry teens walking to Chipotle in the Village. It's funny. In past years I've seen their paths encounter the labyrinth path and they go around. This year not so much. Over New Year's I was walking on a frozen lake with friends' dogs and well, you can imagine their enthusiasm for being outside.
So, what did I do?
With the dogs, I realized two things. 1) I wasn't gonna be able to distract them away and 2) their tracks and my tracks are completely different! Unless the dogs were rolling around in the snow (and thankfully they weren't!), the trail I was blazing would be clear enough for anybody walking on the lake. If they could navigate the lakeshore, they could figure out and keep to the human path if that was their choice. In the picture below a 7-circuit classical is farther out on the lake (and harder to see) to the left of this noodly spaghetti spiral labyrinth. 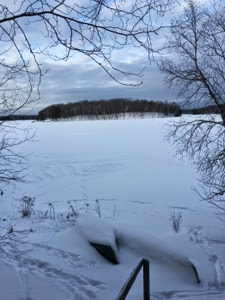 As for the church yard, short of putting up signs of invitation (which crosses my mind lots; I just get stuck on the wording:/), I realized this is just another classic public art design issue: knowing your site, how it's used, and deciding what kind of statement your installation will make as there are times to be harmonic and times to push the dissonance.
Here I wanted to be harmonic so I incorporated the cutting paths into the walk to the labyrinth entrance and cut the number of circuits from the standard 7 to 5, so the modified Classical design would fit the smaller space.
The design is now on a diagonal and seems more intimate. Previously the entrances were off the sidewalk and aligned with the cardinal directions. There's a few trees to the left of this picture which I previously thought were part of the "gateway" and now seems to act like privacy shield.
I would love others to walk it and share their experiences. 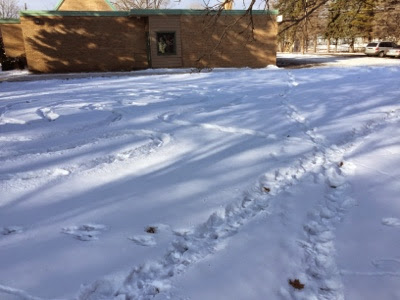